The Estrela Mountain dog comes in two coat types. Both types should have coat resembling the texture of goat hair.

Long coat: The thick, slightly coarse outer coat lies close over the body and may be flat or slightly waved, but never curly. Undercoat is very dense and normally lighter in color than the outer coat. The hair on the front sides of the legs and the head is short and smooth. Hair on the ears diminishes in length from the base of the ears to the tips. The hair on the neck, the buttocks, the tail, and the back side of the legs is longer resulting in a ruff at the neck, breeches on the buttocks and backs of the legs, and feathering on the tail. The males can have a “lion’s mane”.

Short coat: The outer coat is short, thick, and slightly coarse, with a shorter dense undercoat. Any feathering should be in proportion.

Fawn, wolf gray and yellow, with or without brindling, white markings or shadings of black throughout the coat. All colors have a dark facial mask, preferably black. Blue coloration is very undesirable. 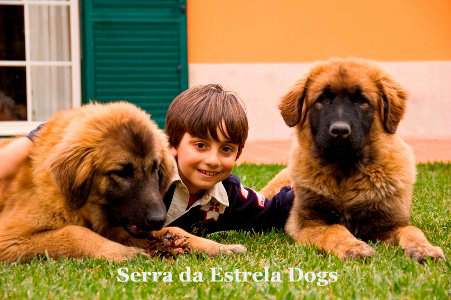 A large, athletic dog, the Estrela Mountain Dog is a formidable opponent for any predator – fortunately, it is not often called upon to rise to anyone’s life-or-death defense. It is calm but fearless and will not hesitate to react to danger, making it an exceptional watchdog as well as an excellent guard dog. It is intelligent, loyal, and faithful, affectionate to those it knows but wary of those it does not. It is instinctively protective of any children in its family. It needs early and continued socialization to be trustworthy around small pets and other dogs.

It’s important to begin training and socializing the Serra da Estrela dog from puppyhood to nurture its acceptance of different situations. This is a strong independent-minded breed that will need persistent training and consistent leadership. It has a tendency to bark, especially when protecting his or her territory. As with most livestock guardians, the Serra da Estrela dog is not a “pet” for everyone. Strong ownership is paramount.