Monsanto castle, like those who have been deployed in this region, have been built by the Templars, whom D. Afonso Henriques, gave this land to the Arabs after the reconquest. The rock mass where the castle is deployed, it could have been a prehistoric fort, later occupied by the Romans, but this fortification only appears with the domain of the Templars, who also did not have that possession for a long time, since there is delivery records these lands to the Order of Santiago, although the reign of King Afonso Henriques. In the reign of King Dinis, the castle have been repaired and expanded their defenses, and again be updated during the Restoration War in the seventeenth century. With active participation in several wars with Spain, this fortress was taken in 1704, following the War of Succession, but in the same year was taken over by the Portuguese. 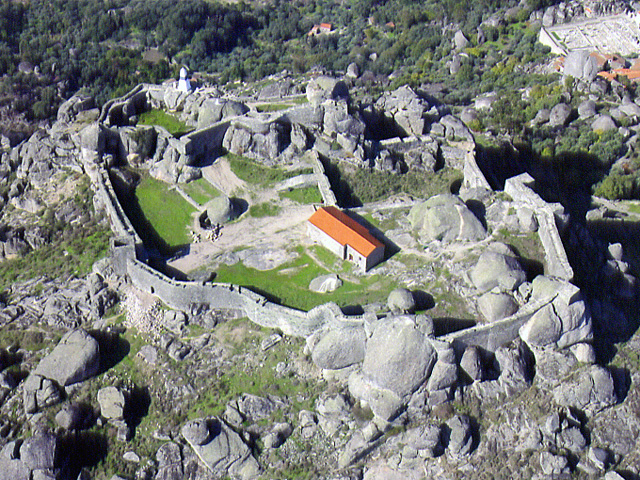 In the early nineteenth century, the Peninsular War, gives rise to new remodeling, which will last for the demolition of five towers, construction of three new batteries and adaptation of the castle church to magazine, which years later exploded and caused serious damage the castle.

A quota of about 750 meters above sea level, has two distinct grounds enclosed by walls, the Watchtower is situated on the parade ground, where also lies the cistern and the ruins of the Chapel of Our Lady of the Castle. The castle and the Monsanto walls are classified as a National Monument.

Legend: The Feast of the Holy Cross in Monsanto are connected to a legend, which refers to the fortress salvation during an attack, you do not need, it will be done by the Romans or by the Moors. Anyway, this enclosure that lasted for seven years had reached the strength of the surrounded limits, only one calf had already wheat and less able to feed, but as a desperate strategy, suggested that women fed calf with wheat and cast them into the walls. When falling on the rocks, the belly of the calf opened and spread wheat, convincing the enemy that the besieged were well supplied with food and decided to raise the siege. This episode is assigned to the 3rd May, when women wear their best clothes, and the sound of tambourines and popular songs, cast from the walls, white pots, symbolizing the calf saved the village.