Located in Idanha-a-Nova, Monsanto is an imposing town carved in granite rough of a stone promontory that dominates the surrounding plain.
The excellent geographic location of the place, made that Monte Santo privileged refuge for the most primitive peoples. 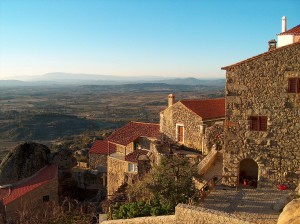 Despite the archaeological survey of its proto-history is manifestly insufficient to accurately trace a historical context of its foundation, will be fair to say that in that stone cluster are traces of an earlier occupation to the Neolithic.
The natural fortress condition and Neolithic axes fragments found on the hill do suppose that Monsanto was a pre-Roman castro.
The proximity of the ancient Egitânia (Idanha-a-Velha) and the road connecting Merida to Compostela and the numerous traces of the Roman occupation (pottery, coins, jewelery and funerary inscriptions) are clear signs that the Monte Santo have welcomed Romans, what it should be a “oppidum”.
To the Romans succeeded by the Goths and the Arabs there have left indelible marks of their passage. Even today, much of ethnographic and anthropological repository of these people survive on the people of the land. An example of this is the feast of Santa Cruz on May 3rd. Pilgrimage deeply marked by pagan rituals, later Christianized.
Underlying the party is the legend of the besiegers. Thus, according to tradition, many centuries ago, Monsanto would be surrounded by a Moorish or Spanish army. The siege lasted seven years, during which the village was depleting supplies until only one remains calf and one bushel of wheat.
The tragedy seemed imminent. Then an old woman of the village masterminded an ingenious plan. After feeding the calf with the last bushel of wheat, was thrown over the cliff, falling in the middle of the besieging camp.
Warriors saw that the villagers gave the luxury of throwing a well nourished cow to the “backyard”, ruled that Monsanto would be under the protection of a strange divine power. That was reason enough for embalarem backpack and put the miles. This is how the shrewdness of an “old lady” Monsantina defeated the besieging troops.
This episode has occurred in the 3rd of May and is on this day that is celebrated every year the Feast of the Holy Cross or the Castle.
The proliferation of legends and Moorish traditions, highlighting the tambourine (traditional musical instrument that should only be played by women) survive as clear evidence of a strong presence of the Arab peoples in this region.
The construction of Monsanto fortress, deeply connected to the history of settlement building, lost in the gloom of the world.
Some researchers support the thesis of Suevo-Visigothic origin of the fortress, but strictly speaking, only from the Portuguese monarchy foundation to define precise chronological contours.
Once you have completed the Reconquista of the region from the Moors, Afonso Henriques recognized the strategic military value of the fortress. So the King decided to send rebuild the fortress and repopulate Monsanto giving you great benefits by charter of 1174, later confirmed by D. Sancho I (1190) and Alfonso II (1217).
Even before assigning the first charter, D. Afonso Henriques had donated to the impregnable fortress D. Gualdim Pais, Grand Master of the Knights Templar.
The strategic importance of Monsanto as a defensive bastion was growing with the passage of centuries. The fortress served as the advanced sentry post from where allowed sighting in advance hostile incursions into Portuguese territory.
In 1510, Manuel rises the village to village, honoring it with the blessing of being able to use his shield the armillary sphere.
The impregnability of the fortress is definitely proven with the last two attempts of occupation by invading armies. The first by Don Luis de Haro (Minister of Philip IV) in 1658, and the second by the Duke of Berwick in 1704. The failure of these daring invaders have deterred similar attempts. From there the fortress gradually lost its military importance.
At the beginning of a violent explosion in the nineteenth century castle powder magazine causes the partial destruction of the fortress and walls.
Later the last garrison leaves the village, placing a lapidary stone a heroic story of courage and fearless defense of the Portuguese border. It was the end of a glorious period in the life of Monsanto.

For centuries, Monsanto was being minutely carved in a large rocky hill. Tempered human genius with due tenacity was forming altars, tombs and houses. This resulted in a harmonious whole and coherent architectural that one can not remain indifferent.
If Zeus and his retinue of Greek gods were stripped of Olympus, certainly not desdenhariam an address as Monsanto. A true Olympus stylish border.
Typical houses of Monsanto “live” next door to the granite rock that protects them.
Wander the winding alleys, discover the sunny nooks and look the look by the majestic landscape are more than enough reasons for the visitor to get lost in the discovery of the land and its people, aged and serene.
In addition to the own urban area and castle, Monsanto also contains various heritage elements worthy of closer look.
Inside the walls, the chapels of St. John and Santa Maria. The first was presumably built in the twelfth century and still boasts a Romanesque portal, and facing the north, a lancet arch.
However, the most important Monsanto chapel is the St. Miguel. Romanesque building (or what remains of it), is located between the castle and the medieval watchtower. Built on a cult altar to Mars, the chapel constitutes clear evidence of the existence of a primitive village. Despite the latent state of disrepair still can enjoy the remarkable axial port bow of perfect round and decorated capitals.
Near the village door is St. Anthony’s Chapel (See. XVI), with four archivolts portal flanked by two canes decorated with the fleur de lis.
As for manor houses, the Solar Graciosa Marquis is the most important, here we can find installed the Tourist Office. Built in the eighteenth century belonged to the family of Geraldes Andrade, Medellin lords and Captain-General of Monsanto.
Finally, the ex-libris of Monsanto. The imposing medieval fortress, with several enclosures, doors and staircases. Inside the walls stand out the chapel of Our Lady of the Castle, the false door and keep. The castle was classified as a national monument in 1948.